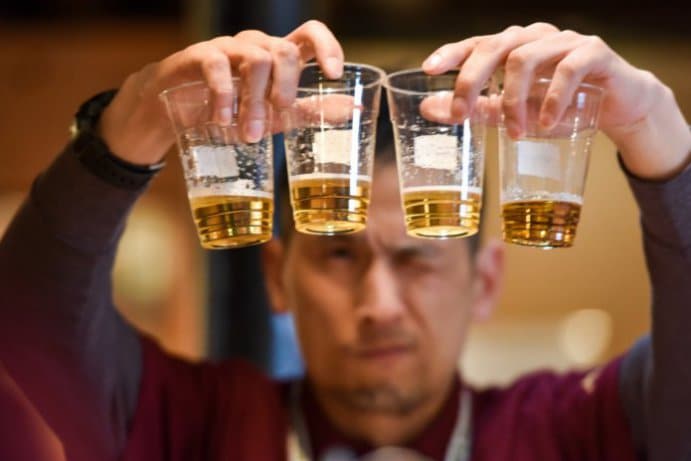 The judging panels now confirmed for the International Brewing & Cider Awards 2017 reflect the truly global reach of the competitions. Forty-eight brewers and cider makers have been recruited from 20 countries, travelling from as far afield as Japan, New Zealand and China to judge an anticipated 1,000 beers and ciders in Burton-on-Trent next March.

The International Beer & Cider Awards are unique in requiring that only working brewers and cider makers may join the judging panel. This criteria and the depth of experience of the panel, combined with a ‘double blind’ system for judging and the consensus approach to assessing the entries, has given the competition a reputation for a robust and fair judging process.

The judging panel is refreshed ahead of each competition to ensure a balance of new and seasoned judges; in 2017, around 50% of the judges will be at the competition for the first time.

Joining the panel for the first time is Brian Grossman of Sierra Nevada, who said, “As a second generation brewer, my family and I have always held this competition in the highest regard. The (dare I say) compulsive care that goes into dreaming up and brewing, sending, receiving, storing, and serving  entries speaks to the integrity of the competition, and brewers from all over know to send their very best.
“In our current industry landscape, a laser focus on quality is perhaps more important than ever. The International Brewing Awards help keep that mindset at the forefront and I can’t think of a more meaningful or prestigious stamp of approval for a beer than an IBA medal.”

Chuck Hahn, brewmaster at Australian brewer James Squire, said “I’ve judged at a number of international beer competitions, including the Great American Beer Festival, which has many different style categories with specific guidelines for each. Judging at the International Brewing Awards is different, with broader categories and considerations given for market acceptability and beer drinkability.

“I feel this type of assessment is essential in the highly competitive beer market.  A good beer becomes great, not from more hops and more alcohol, but from over-all balance, sessionability and saleability.”

New to the International Cider Awards panel is Ryan Burk, head cider maker at Angry Orchard. He said, “Angry Orchard is committed to drinker education and raising overall awareness of cider in the USA.  In countries such as the UK, the cider market is around 15% of the size of beer, whereas in the US it’s around 1% percent, so we have a lot of running room to bring cider to its full potential. It’s an honor to take part in judging in the company of the world’s best cider makers as we work together to build a global cider culture and raise overall awareness.”

Ruth Evans of competition organisers Brewery Technology Services said, “We’re delighted to have assembled a judging panel that is as diverse as the entries we received, with representation from five continents, and from a diverse range of entrants from craft producers right up to multi-nationals.

“The fact that these well-respected brewers and cider makers are prepared to give up their time, and travel from all corners of the globe, to be part of our Awards, is testament to the admiration and affection in which they are held by the global drinks industry.  Former judges have relished this unique experience, and our chair of judging Bill Taylor has once again brought together a rich and balanced diversity from both new and returning judges for the 2017 competition.

“We are looking forward to welcoming our 48 judges to Burton-on-Trent in March, where after judging is completed the full list of our 2017 medal winners will be announced. On 26 April, at our Awards luncheon held at London’s Guildhall, we will announce our 11 Champions.”

Entries to the Awards are open until 31 January 2017 – a month later than in previous years as the competition has been moved, to take place from 7-9 March at the National Brewery Centre in Burton.  The last competition, in 2015, attracted close to 1,000 beers and ciders from 50 countries. It is the oldest global brewing competition in the world, dating back to 1886. Cider was an integral part of the international competition from the early 20th century, and revived in 2013 before being launched as a standalone competition in 2015, when entries doubled.

Entries to the International Brewing & Cider Awards should be made online at www.brewingawards.org.uk or www.ciderawards.org.uk.  The 2017 competition is supported by headline sponsors Barth-Haas Group and Krones.